Welcome to the Dynamics in Epilepsy and Cognitive Development (DECODE) Lab. We’ve moved! We’ve transitioned to Nemours Children’s Health and the University of Delaware this fall! Check out the Open Positions section to join us. 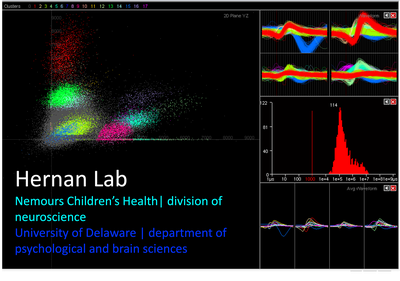 How do neurons fire to allow us to attend to relevant information, integrate that information with past experiences and recent memories, and make a decision? What happens when a developmental insult changes the trajectory of these neural networks to lead to long-lasting impairments in executive function? Are there specific treatments that can modify these developing networks in the context of such an insult to ameliorate the cognitive deficit? What is the role of astrocytes and other glial cells in mitigating neural network damage from neurodevelopmental insults?

One in every 26 people will be diagnosed with epilepsy some time in their life, many of these diagnoses happen in children. We have found that seizures during the early life period are associated with significant impairments in learning and memory and attention deficits that persist to adulthood. These learning and memory impairments are the result of abnormal firing patterns in the brain in specific brain regions, such as the hippocampus and the prefrontal cortex. I have previously shown that ACTH, a hormone that is an endogenous part of the HPA axis, can prevent cognitive impairment in the context of early life seizures. I believe this is through a mechanism that involves ACTH acting as a neuropeptide on a specific set of receptors in the brain.

My lab uses state-of-the-art single neuron recording techniques to examine how circuits control behavior and how abnormal neural processing can lead to cognitive impairment in neurodevelopmental diseases, such as pediatric epilepsy. Specific projects in my lab involve using in vivo single unit and local field potential recordings to record neural networks within and between the prefrontal cortex and the hippocampus simultaneously during tasks that require working memory and executive attention to: 1) examine the long-lasting effects of early life insults (like seizures) on specific neural network parameters that underlie cognition, and 2) test the protective role of early treatment with neuropeptide modulators (like the melanocortin peptides) on cognition and the underlying neural firing patterns. My lab is also interested in 3) the acute role these neuropeptides play in modulating developing neural networks. Many neuropeptide receptors, including those for the melanocortins, are located on both neurons and glia. We are interested in how glia and neurons interact dynamically during development, how this interaction can be affected by seizures, and how neuropeptide modulators can alter this interaction.

My work is poised to challenge a particular dogma of pediatric epilepsy treatment, namely that treating seizures is the only effective way to prevent deleterious cognitive outcomes. The potential findings of this research, therefore, have huge implications for the way physicians treat epilepsy in children.

Team science is the best science; to that end, we work within the context of the Epilepsy, Cognition, and Development Group. Good mentorship is a responsibility for every PI. A supportive lab environment that fosters growth and development of trainees is paramount and open lines of communication are crucial. Science is hard, but the relationship with a mentor should be encouraging and seed innovation rather than stifle it.

Our lab is currently recruiting graduate students, and postdocs. Please check out the open positions section and reach out if you have an interest in joining the lab! 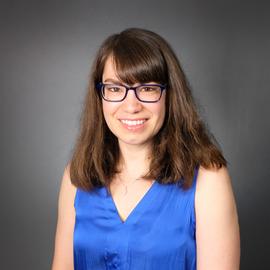 The University of Delaware

Amanda Hernan is a Research Scientist and Head of the Dynamics in Epilepsy and Cognitive Development Lab at Nemours Children’s Health and an Assistant Professor of Psychological and Brain Sciences at the University of Delaware. Her research interests include pediatric epilepsy and understanding the mechanisms of cognitive impairment in this population.

Interested in what we do? Want to get involved? Reach out!